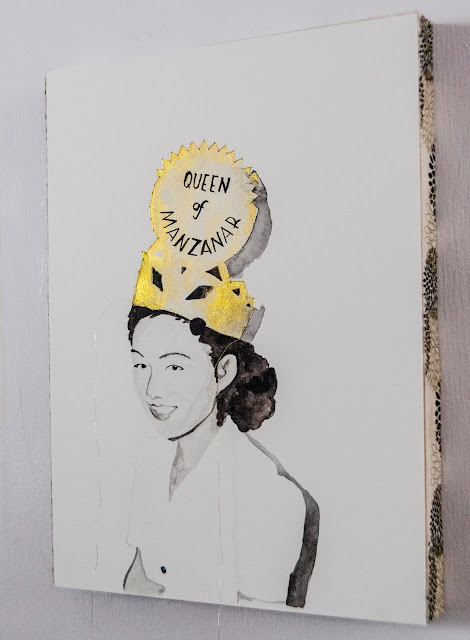 hello friends ! i'm super excited to announce that i'm going to have a solo exhibition with walter maciel gallery that opens march 2, 2019.

there is an artist reception from 6-8pm that evening and i will be there. if you are in the area i'd love to see you !

above is one of many pieces i've been working on over the last couple years. the show is all about the internment of the Japanese during WWII. here's the press release:

Walter Maciel Gallery is pleased to present the exhibition, Hinan // Evacuation by Lisa Solomon marking her fourth solo show with our gallery.   The new body of work focuses on Japanese Americans who were forced into internment camps and the consequences of Executive Order 9066 signed by President Franklin D. Roosevelt on February 19, 1942 during World War II.  The show questions the physical and emotional effects left upon the Japanese American community and will include a film series of short documentaries on survivors in Gallery 4.

Solomon grew up in Los Angeles and Santa Barbara with no knowledge of the Japanese Internment Camps as a young student in California public schools.  Her mother emigrated from Japan in 1971 after meeting her Jewish American father and she had some affiliation with the Japanese American community in Southern California.  During this same period of history, the Holocaust was happening across Europe using similar tactics to capture a specific group of people based on their race.  Although the outcome for Japanese Americans was certainly different with most being spared torture and execution, the parallels of human repression, fear and racial bias became of interest to Solomon in the production of this work.  Upon further research she learned that there were relocation collection points near her home in Oakland and she could superimpose in her mind the lines of people waiting to be “evacuated” at these locales. Furthermore, our current political spectrum has brought a lot of racist, hateful, and illegal circumstances that have allowed for the attempt to pass laws much akin to the notions behind Executive Order 9066.  In his first two years in office, Trump implemented the Muslim Ban restricting travel for specific ethnic groups while separating thousands of families at the US border. It has become clear that our nation is once again confronting, resisting and reasserting white racist and colonial ideals.